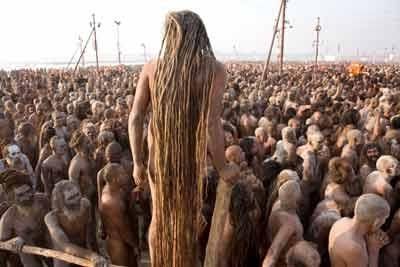 Most feared clan of Sadhus or ascetics of India, “The Aghori Sadhus”. They have always been a subject of curiosity among us. We have all seen their pictures and some might have met them. Aghori’s ignite a level of mysticism, curiosity, fear, disgust, and astonishment.

There are many rumors that run across their lifestyle and way of worshipping. Aghoris are notorious and known for their uncommon and grisly rituals. They are also acknowledged as the cannibalistic tribe of India.

They associated with making love to the corpses. As well as using human skulls for religious rituals. They perform these rituals as their religious routine. Enough to arouse curiosity and are among the public. Well if you Surprised then we have just begun!

Man who formed the Aghori community lived for 150 years. According to an urban legend, Kina Ram, the very first Aghori. who laid down the foundation of the lives for Aghoris lived up to 150 years

Aghoris believe that Shiva is all mighty. He is absolute, omnipotence, omnipresence and omniscience. They also believe that he is the one who runs the universe.

The story of revenge

Tailanga swami is one of the most well-known Aghoris to ever live. He said to slapped and ejected from Kasi Viswanath temple by a priest. Because he saw him worshiping Lord Shiva with his own excreta.

Later, the local king of Banaras saw in his dream that Tailanga swami was a reincarnation of Lord Shiva. The next day the priest died under mysterious circumstances.

Yes they known to live at extreme conditions in the nude state. Snow clad mountains, hot deserts to tiger-infested jungles are some favorite spots of Aghoris to live.

They also believe that nothing is impure or nasty or filthy. If you can concentrate on god even while doing the most perverted acts, then you reach in unanimity with god.

When normal people look out for picturesque places to meditate, Aghori’s sit on the corpse to meditate and concentrate on god.

Aghoris believed to have no qualms in being naked. Most of them are seen without a single piece of cloth while some are often seen covering their body with minimalist clothes. They also cover their body with the ashes of dead bodies.

Skull and bones are their favorite ornaments

While we look for diamonds, rubies and emerald to decorate our self they wear skull and bones.

Sex with the dead

In the midst of night at a cremation ground between the chanting of loud mantras and drum beats. They make out with dead women to rise supernatural powers. They also make out with women who are menstruating. But they force no women to do so.

Yes, they believed to eat the meat of dead bodies that are bought from cremation ground.