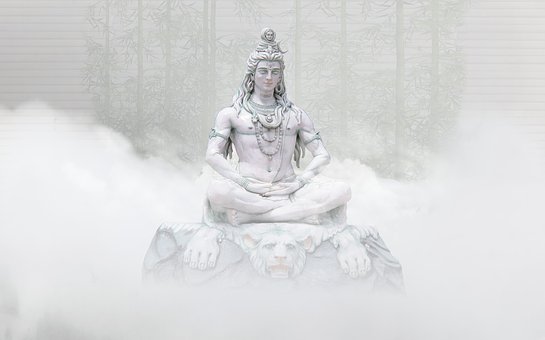 According to science, Every element made up of atoms. Atoms, the smallest particles that can exist in an element. Furthermore, An atom made up of ‘Electrons, Protons and Neutrons’.  According to physicist Peter Higgs and his fellow scientist’s. The universe made up of a Small Element called Higgs Boson Element or  “God particle“. There was no universe billions of years ago, only darkness. Suddenly “a point” originated.
According to oldest hindu mythology Book”Shiv Puran”, The universe developed by the union of the Sound and that point (light). In Vedanta, it called as “Bahram Tatv”. Also, according to Upanishad the reason for the origin, position and destruction of the world is Brahma Tatv. In Sankhya Darshan, it said that our body made up of 5 natural elements called “Pancha Mahabhuta”.  So that God Particle discovered already in Hindu books several thousand years ago. Later on, Peter Higgs rewrite this theory Got Noble Prize.

Theory of Karma derived as Newton’s third law of motion

The third law states that for every action there is an equal and opposite reaction. What we Sow is what we Reap. Hindu Theory of Karma States that already thousands of years ago.

The world believes that Newton discovered Law of Gravity at first. But, surprised to know that in Hindu mythology Indians Like Varahamihir, Brahmagupta Bhaskarachaya knew the Laws of Gravity hundreds of years before Newton.

Use of nuclear weapons

Some historians claim that there is a possibility of nuclear weapons, used in the war of Mahabharata or post-war. The fire of confusion was even more ignited by the recent discoveries. Green glass and other radioactive weapons and samples found in excavations. They related to the Mahabharata war. If you are unaware of the Green glass, to let you informed. These formed when sand melts down at very high temperature prevailing in Nuclear Explosions.

Human Cloning was There too

In Srimad Bhagavatam, it mentioned that after the death of Nimi, seers practiced the process of Mantha. Mantha is the process of creating a new baby from the dead body of Nimi. The baby named Janaka as he was out of his father’s cloning. As the baby born out of the process of Mithila, his kingdom was also named as Mithila. Another episode we come to know is when Maharishi Valmiki produced Duplicate of “Lava” named as “Kusha” from the grass.  This was happened when Maharishi Valmiki didnt Find Lava in the Ashtmram so he used the process of cloning. This process is far more advanced to what practiced now. “Raktabij” is another story where each drop of blood produces his very “Adult Clone”.

Vaisesika Sutras later discovered as Theory of An Atom

Around 600BCE  an Indian scientist, sage and philosopher Maharshi Kanada describe the  atomic theory. Also, described dimension, motion(Second Law of Newton), chemical reactions of atoms. According to Kanada, All the elements are divied into 6 categories known as Dravya (substance), guna (quality), karman (motion), samanya (universal), visesa (particular), and samavaya (inherence).Furthermore he describe each of them accordingly.

According to Vaisesika Sutras

Change of motion is due to the force applied

The Change of motion is proportional to the applied force and force direction.

Every action has equal and Opposite Reaction

The science behind the birth of Kauravas has even not found yet in recent years! The embryo of Gandhari has split into 101 separate containers. Known as the process of test-tube babies. And the embryo grows outside the uterus. The technology that produces human being outside the human body. Such ancient science is beyond our imagination.

We all aware that there are two major types of transplantation. First, where parts like hands, arms legs transplanted, they are not the vital organs. Another process which includes transplantation of vital organs. One instance where you can get the combination of both is the transplantation of brain. The riskiest and sophisticated transplantation one can ever think of. In Hindu Mythology, One example to cite is the story of Lord Ganesha. When Shani looked at Lord Ganesh, the child’s head turned into ashes. Parvati’s wailing led Vishnu I search of a head substitute. He found a sleeping baby elephant by the riverside and decided to affix its head on Ganesha’s body.

We all know the story of Usha and Chitralekha. Usha sees a dream where she meets her dream man. But unfortunately her dream gets broken and she tells her friend Chitralekha. Chitralekha finds her dream man through drawings, interpreted from Usha’s dream. Her painting concludes that he was Anirudha, the grandson of Lord Krishna. Then they teleported them to Dwarka, to meet Anirudha. The science of sketching is still practiced under investigations. But teleportation is still unknown.

So it is said that an Idea could change a life, So i discovered the Ideas of Old Indian Mythology and Sages who changed many Lifes and Provide a base to many Nobel Prizes. Hance no one Efforts go in vain. neither indians nor the people who read our old Indian Mythology to discover more ideas.